Dating the Ban Chiang cultural tradition has been the subject of controversy and scholarly debate for more than forty years.

The excavations in 1974 and 1975 showed that the site had a long stratigraphy and was occupied for thousands of years (Gorman 1976).

In the early 1970s, thermoluminescence dates on unprovenienced ceramics suggested, incorrectly, that the striking red-on-buff pottery that had first brought Ban Chiang fame was more than 6000 years old. However, we know now that this pottery dates to the Late Period (300 B.C.-A.D. 300). 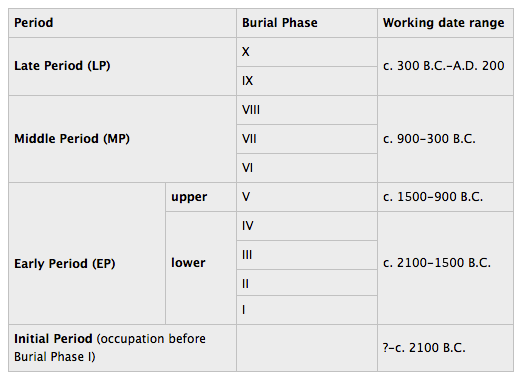 Most recently a new series of dates from bone have been proposed to radically revise the Ban Chiang chronology (Higham et al. 2015). However, these new dates are out of sync with other regional evidence and may have technical flaws (White 2015). The scholarly debate on Ban Chiang dating shows no end in sight.

White, J. C.
1986 A revision of the chronology of Ban Chiang and its implications for the prehistory of northeast Thailand. Ph.D. dissertation, University of Pennsylvania.